Vintage hats for ladies who lunch! 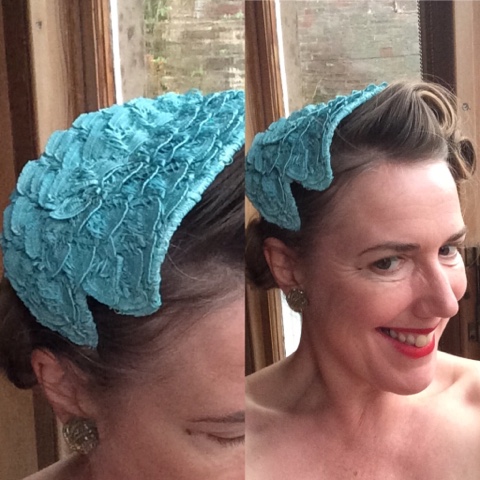 These little cocktail hats are perfect for wearing with victory rolls!

I was recently invited to Eindhoven in the Netherlands to run a workshop in a vintage ribbon-pleating technique. I had a fantastic time and was offered such generous hospitality. The trip came about as a result of my Mobile Makery Tour of Europe in the summer. You may remember that I took part in a hat festival in Caussade in France (see earlier entry)  - and it was there that I met my Dutch millinery friends. They were keen to learn some of the methods I outline in my book The Modern Girl's Guide to Hatmaking - and this resulted in my trip to Eindhoven. Whilst there, I came across a fantastic supplier of vintage millinery materials. I bought some gorgeous strip straw and decided to use it to cover one of my handmade wire frames. 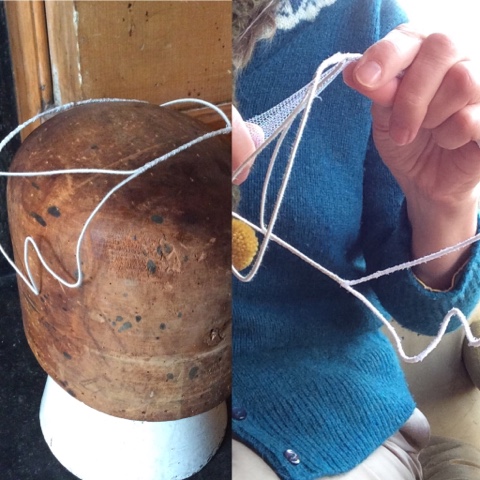 I make the frames by hand, using very strong millinery wire - the idea is to form similar shapes to the small perching hats that were so popular in the 1950's, but without using a block. I then bind the wire with tulle and stitch a tulle cover on top, stretching the tulle so it's nice and taut. Once the tulle cover is in place, you can trim it it with whatever you wish. 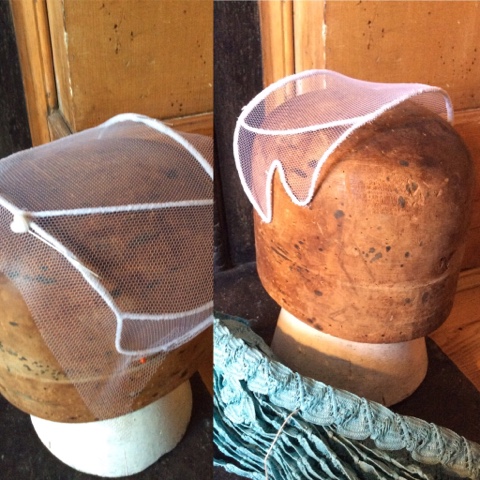 The first task is to bind the outer edge of the frame. I find that softening the straw with hot water really helps as it needs to be very malleable to do this. Once the edge is covered you can then sew the strip in one continuous piece to the rest of the base - taking care to hide your stitches in the straw so they're not visible on the right side of the hat. 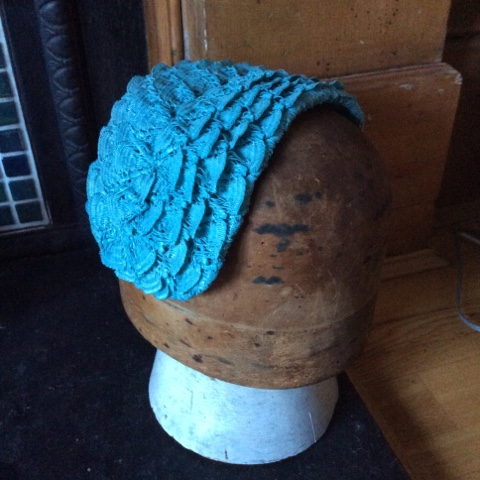 The technique is very satisfying and makes a really light hat that can be trimmed in many ways. Use steam to lightly block the shape once finished. The trick lies in constructing a good initial base that will 'self-grip' to the head. Perfect to wear with complicated hairstyles like victory rolls!

Knitting natter - or not a natural knitter! 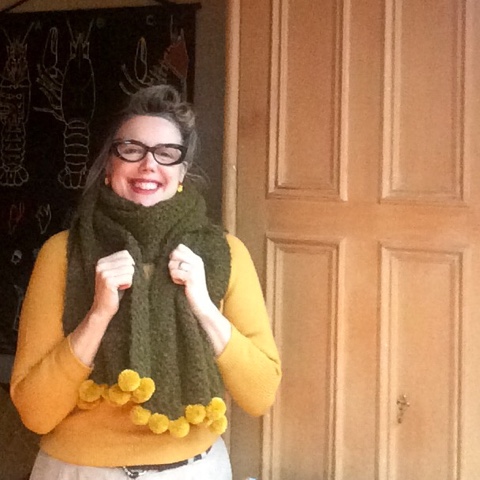 Now folks. People who know me, will know that I'm not a natural knitter. I'm pretty bad at enjoying the process, too often thinking of the result and wearing the thing that I've just made. I'm getting better, but I'm not there yet. Thus it is that knitting is generally too slow for me. However, as I'm currently sojouring in Scotland where it's pretty cold, I thought I'd try again. I've been yearning for texture and heathery colour and I needed a scarf, so why not just relax into it and make one? 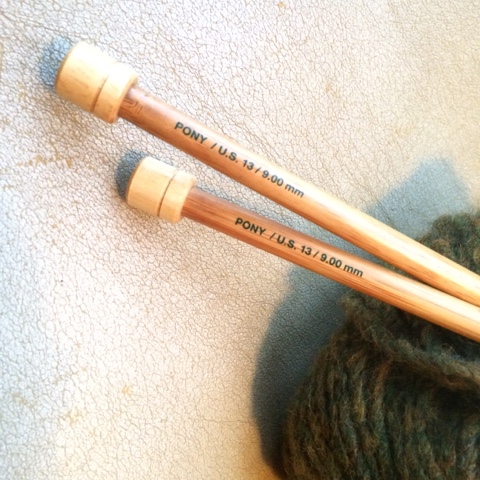 I had bought these rather pleasing wooden needles for a previous hat project (I am averse to knitting on small needles) and headed to Liberty (on a recent trip to London) to buy some wool. I figure if I'm going to make something it's better to use the best you can afford and create a luxurious item that you wouldn't normally buy. 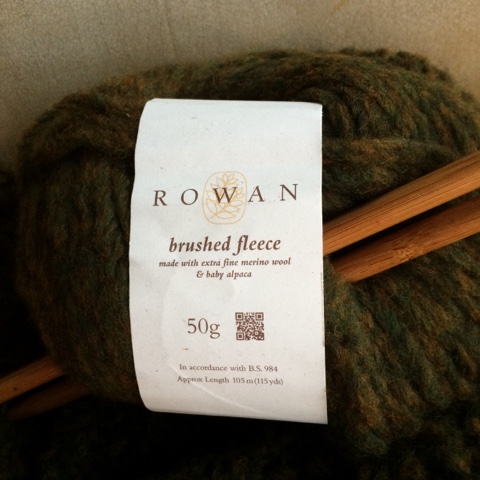 I purchased four balls of this lovely Rowan yarn and was assured by my friends in the Liberty knitting department that a scarf would not need a pattern. I therefore plucked a number out of the sky and cast on 40 stitches. A brief bit of research on the internet delivered 'moss stitch' which looks lovely and nubbly and is achieved by alternating knit one purl one on the first row, with purl one knit one on the second row,  and so on. I figured that even I could manage that (although if you can spot the mistake here - there's a prize....!) 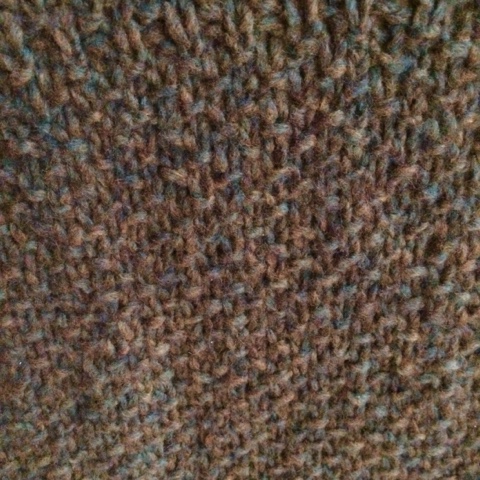 Two endless coach journeys on National Express and a couple of quiet vintage fairs later, I had almost knitted half a scarf. I realised to be honest, that if I had cast on just 20 stitches to start with, I'd actually have almost finished my scarf! But I resolutely carried on, piping up every now and again to ask anyone who would listen, "am I nearly there yet?" Each time I was told that I needed to knit at least another few inches. So, to encourage myself to finish the scarf I ordered 20 wool pompoms on ebay - made to order in a range of colours that you can choose for yourself. Yes, I know I could have made them too, but I wanted a quick-fix incentive to finish! 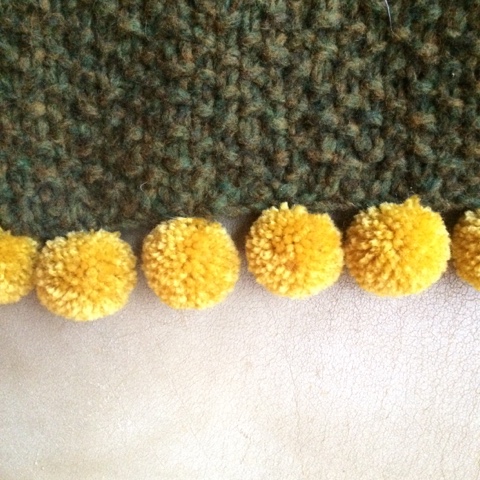 The carrot and stick approach worked well, and yesterday I finished my scarf and attached my pompoms. I hope you'll agree it's worked well! I only used 3 balls of wool, so I have enough to make a matching hat too. I'm actually glad I made the scarf 40 stitches wide as it can now double as a wrap or indeed - a rather lovely throw! If I can knit a scarf, then anyone can. Go on, give it a go! You'll feel so proud of yourself when you're done, and you'll be warm  and stylish to boot! 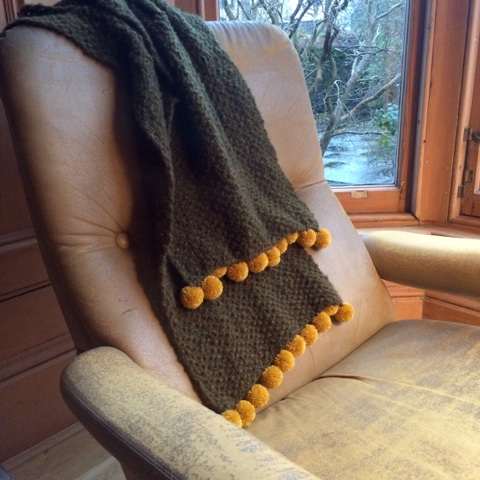