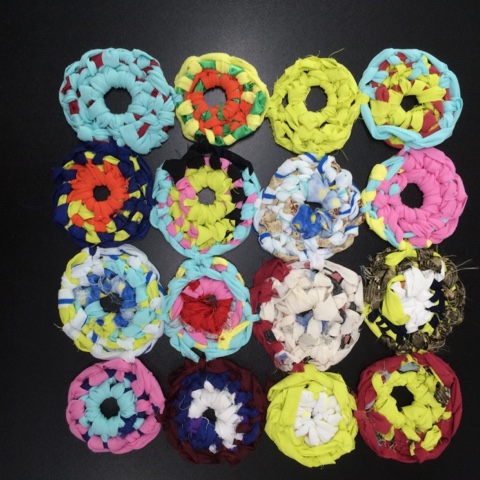 A couple of weeks ago I posted about my efforts to come up with a rag rug making technique that children could do fairly simply. I'd been invited to work with two Manchester schools by Imperial War Museum North using local source material, so we focussed on the memories of an elderly gentleman reminiscing about making a rag rug when he was in the forces. I worked with two schools within very different catchment areas. One was an ESL specialist school in the city working with year 5's and the other was a school in a more leafy suburb working with year 6's. I think the year 6 kids grasped the technique pretty well, whilst the year 5's struggled a bit - and with large class sizes it was the usual thing about trying to give enough attention to everyone. I was the only adult in the room with any real experience of the technique which made it harder. However, I was still very pleased with what the children achieved. It just shows how a number of smaller pieces can be stitched together to form a larger work with real impact. A great way to get kids upcycling too. 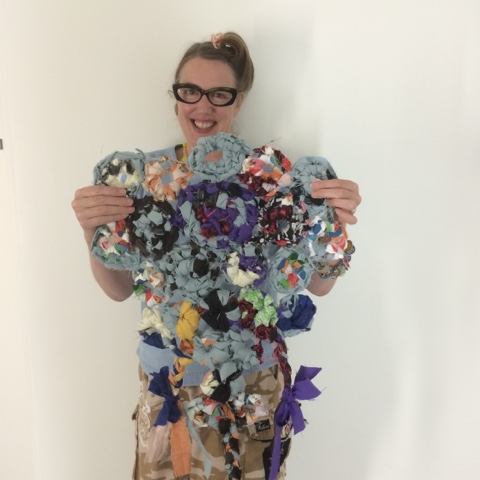 Bambi Goes to the Museum

Imagine taking your campervan right inside the inner sanctum of a very famous museum. Wouldn't it be something of an adventure? A rarity? An outright impossibility? Take a look at the pictures below. I know it might seem hard to believe, but there is Bambi - aka The Mobile Makery - looking very much part of the scene at The Imperial War Museum in Salford! But what were we doing there? 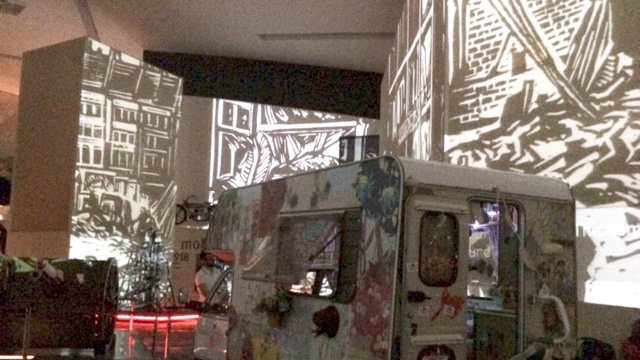 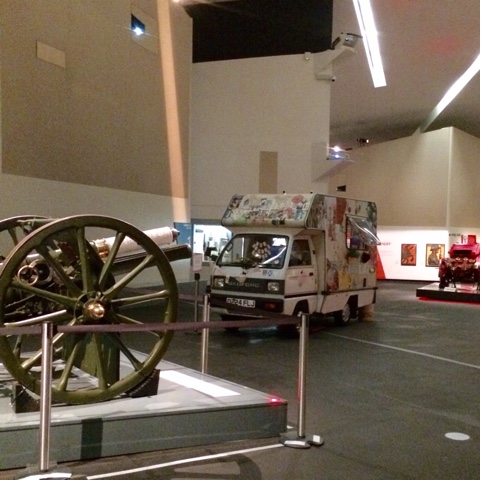 At the moment, IWM North is showing Fashion on the Ration. I saw the exhibition twice down in London and was really impressed. It's all about street style during WWII and how innovative and thrifty women in particular proved to be when it came to devising a wardrobe that was smart, attractive and functional at a time of austerity and rationing. Make-do and mend was the order of the day back then and being something of a modern make-do and mender myself, I was invited to offer a thrifty creative workshop to visitors. Not only that, but Bambi -  my upcycled craft studio on wheels, was to be a star of the show for a special weekend at the start of June. 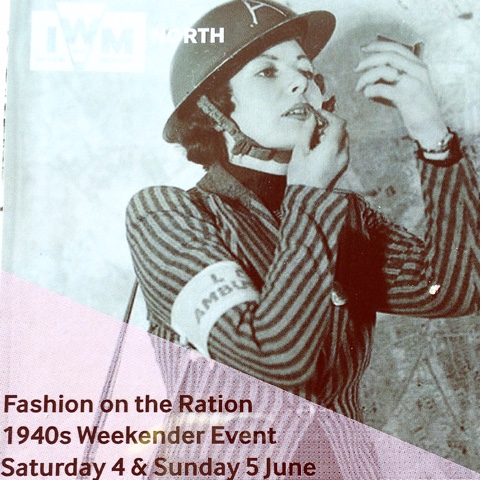 It was incredible to see peoples' reactions to Bambi. Many of the visitors couldn't quite understand what a campervan was doing at IWM. I had to explain the link between modern upcycling and the wartime ethos of make-do and mend. But once people got it - they were hooked - hopping on board to have a look at Bambi's upcycled interior and decorative touches. Two teenage girls couldn't quite believe that I really DO travel around in Bambi putting on creative pop-up workshops and speaking about how to make beautiful stuff out of throwaway trash! 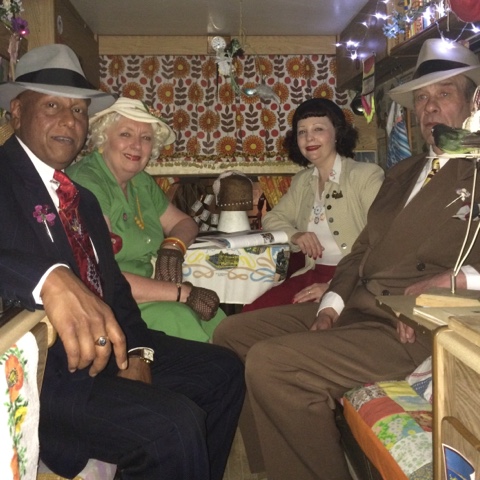 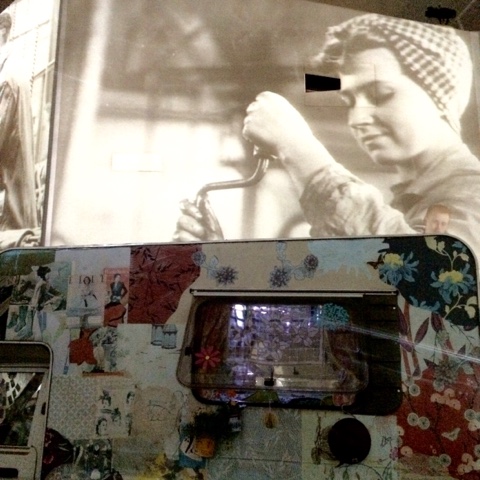 My take on this for the museum was to offer workshops turning old T-shirts into turbans - the sort of headwear that was worn by the women working in the munitions factories during the Second World War. I think it's fair to say that some of the ladies who came along are now ADDICTED to turbans! 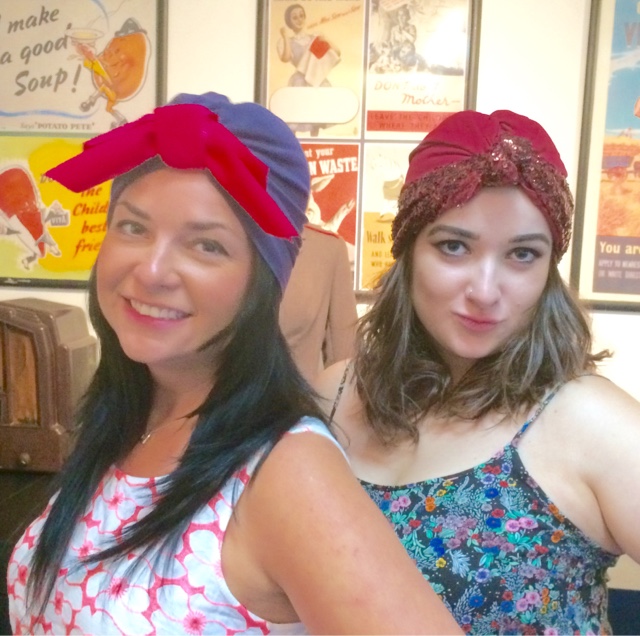 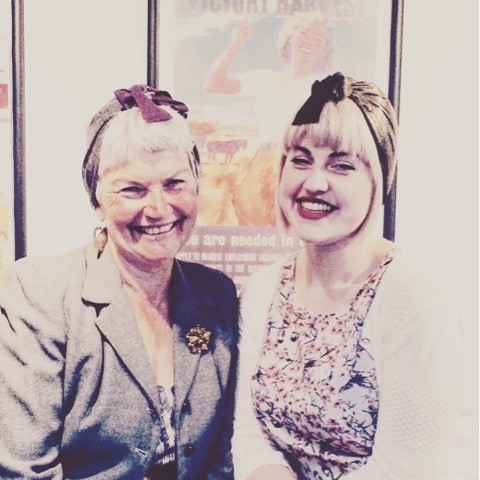 My weekend at the museum was over all too quickly. Staff had really taken to Bambi - who'd almost become a living character in their eyes! Bambi often has this affect on people. 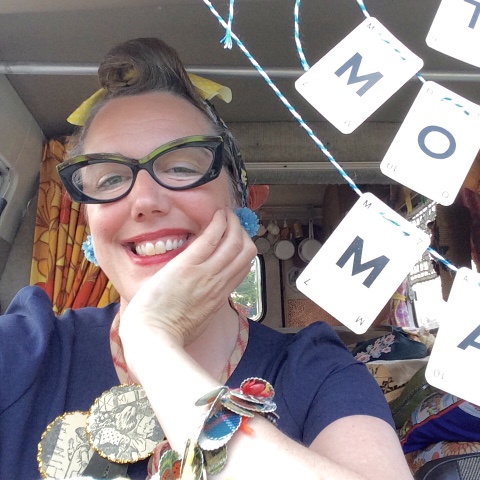 Special thanks to all the museum staff and to our lovely mechanic who had to drain Bambi of petrol, take out the gas cyclinder and battery and put everything back again perfectly so that we could drive back to Scotland without a hitch! 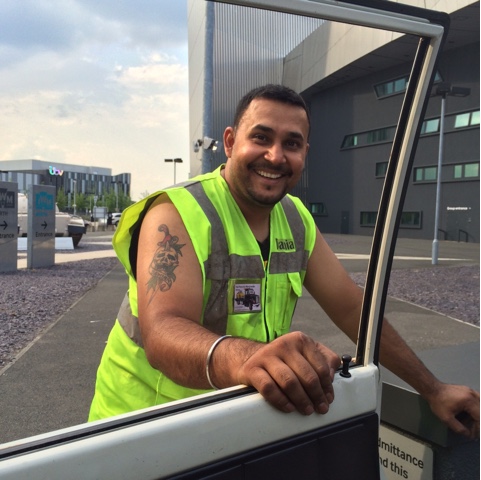 Do go and see Fashion on the Ration at IWM North. It's on until May 2017. Also accompanying the exhibition is a marvellous book of the same name by author Julie Summers and if you want to make your own thrifty and stylish  turban, you'll find it in my book Chic on a Shoestring.

Textiles. What do you think of when you hear the word? Knitting? Lacemaking? Sewing lessons at school? A pretty patchwork quilt perhaps? Certainly in my lifetime, fabric-related study has always had female connotations. Fabrics are soft. Fabrics are comforting. Fabrics are feminine. We forget that fabrics are also technical, robust, waterproof, fire-retardant, life-saving. They are engineered, developed and researched as well as crafted, stitched and stroked. Your Macintosh coat and Hunter wellies (both Scottish brands) were the result of robust experimentation in the laboratory and on the battle field. 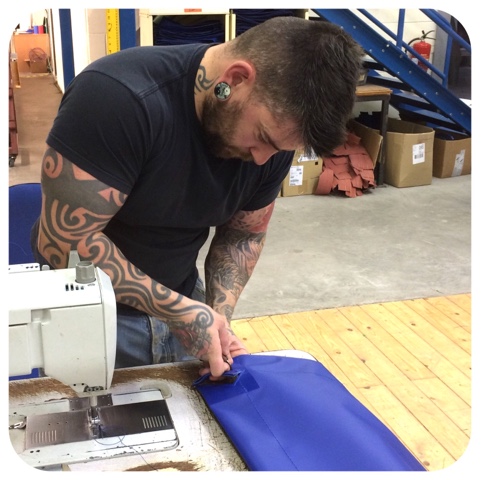 All this came to mind on a recent visit to Montrose Rope & Sail, a Scottish manufacturer with a textile heritage going back over 200 years. Founded in 1789 the company first served the fishing industry, making ropes and sails that could withstand the rough conditions out in the middle of the ocean. As the Scottish fishing fleet diminished the company had to change tack and the Paton family, who took over the business in the early 1900's have since made a name for themselves in the North Sea Oil & Gas Industry. Literally thousands of oil workers have been kitted out for the rigours of life on the rigs by Montrose Rope & Sail. Everything from bags to giant tarpaulins designed to protect monster drilling machines -  you name it, MR&S can make it.

Of course the times they are a-changing and as the offshore oil sector braves challenging commercial conditions, Montrose Rope & Sail is adapting yet again - and this time they're braving the stormy seas of the fashion world.

Whilst  visiting Montrose Rope and Sail I noticed a metre-high tarpaulin rope storage bag that's used on the rigs. The shape really appealed to me and so I approached the company with a similar design for a smaller multifunctional bag which can be used for shopping, laundry, the beach or picnics. It's really robust and can be chucked in and out of the car or hauled around on public transport without breaking whilst its flat bottom means it doesn't tip over. I didn't want anything with bells and whistles on it, just something simple, practical and robust. My Mother was born in Montrose and so it's an added bonus for me to be able to support a local company which employs local craftspeople to create a local product. 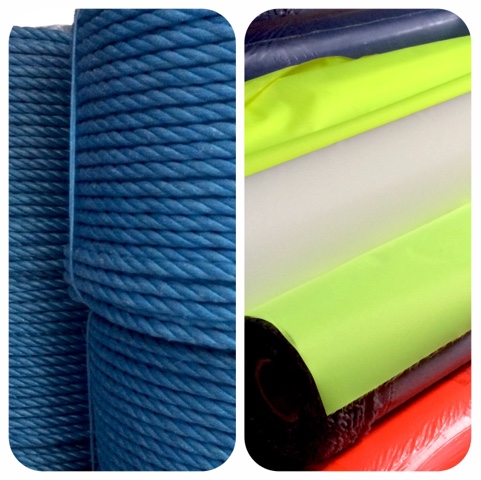 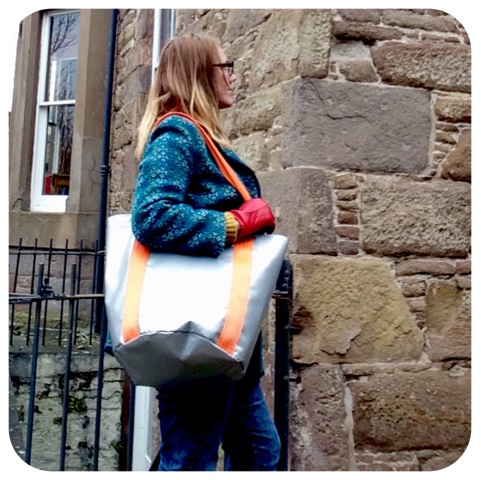 The new bag is available in a range of finishes. Please contact me for further details!
Email: maryjanemillinery@hotmail.co.uk